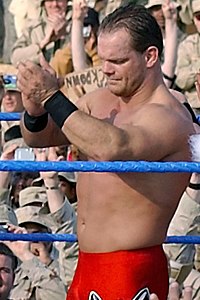 Shocking news. Professional wrestling superstar Chris Benoit killed his wife and 7-year-old son before hanging himself from his weight machine, authorities said on Tuesday. Investigators said the murder-suicide happened over Friday and Saturday in the suburban Atlanta home where the bodies of Benoit, his wife and young son were found on Monday.

Nicknamed "The Rabid Wolverine" and "The Canadian Crippler," Benoit had canceled two events in Texas over the weekend citing an undisclosed "family emergency," his employer, World Wrestling Entertainment, said on its Web site.

Benoit then sent "several curious text messages" to friends early Sunday morning and this prompted authorities to check on him and his family at their home, the statement said.

Autopsy results showed that Benoit first murdered his wife, Nancy. She was bound at the feet and wrists and died of asphyxiation sometime on Friday, Fayette County District Attorney Scott Ballard told a news conference.

She was wrapped in a towel and some blood was found under her head but Ballard said there were no other signs of a struggle.

The couple's son, who also died of asphyxia, was apparently killed as he lay in bed on Saturday morning, hours before Benoit hung himself, Ballard said. Source Yahoo.com