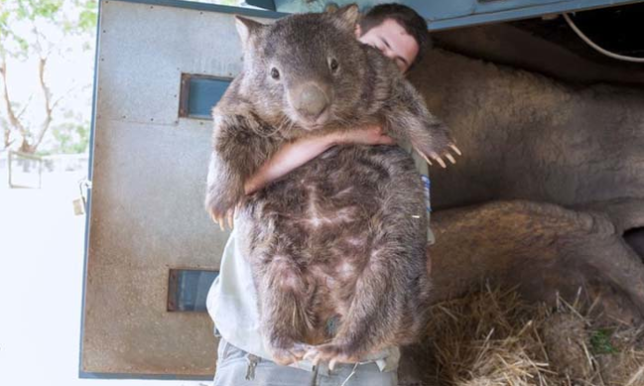 袋熊是四條腿的有袋類動物，原產於澳大利亞。他們被稱為敦實的哺乳動物，地球上沒有人可以抵抗可愛的牠們。袋熊帕特里克是最老的袋熊…而且亦很可能是最可愛的。
袋熊帕特里克在澳大利亞巴拉瑞特野生動物公園生活。牠和牠的撫養員在一起生活，這些撫養員可能是世界上最幸運的人。
Believe it or not, Patrick the wombat, who weighs 84lbs (38kg) and recently celebrated his 29th birthday, was not the product of a radioactive experiment gone wrong.
The massive creature, who is thought to be the biggest and oldest known wombat in the world, has become a social media sensation after Tourism Australia posted a birthday message to him on Facebook.
People’s instant love (or perhaps their fear) of Patrick won him 258,000 ‘likes’ within 24 hours.

Despite his fame and his buff physique (which is the result of being fed carrots, not protein shakes), Patrick has sadly never known the tender touch of a female wombat.
Like all big things, he had humble beginnings, being orphaned as a baby he was taken in and raised by Ballarat Wildlife Park where he still lives.
The park’s social media manager Lauren Rix said: ‘We always knew that Patrick was a very special wombat, but the huge social media response that he has received this week is incredible.’
Patrick, who has never been able to be released back into the wild due to being rejected by other wombats, now spends his retirement chilling in his wheelbarrow near the entrance to the park and greeting visitors.
What a life.
His legions of fans have turned ‘Wombat Pat’ into something of a celebrity, and the Ballarat Wildlife Park are getting ready for a big celebration when he turns 30, ten years more than wombats in captivity usually live.
Ms Rix said: ‘It’s safe to say that his birthday this year will be extended into a week of celebrations here at Ballarat Wildlife Park.’