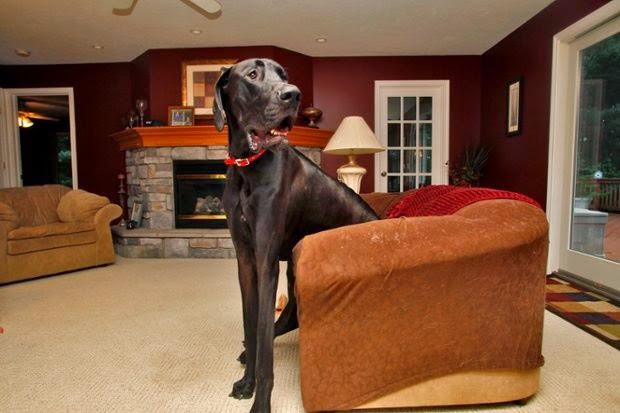 Zeus, the Great Dane who held the Guinness World Record for being the world’s tallest dog, has died.
The dog, whom owner Kevin Doorlag of Otsego, Michigan, described as a “gentle giant,” stood 44 inches tall and was 7-foot-4 when he stood on his hind legs.
Zeus died Sept. 3, just shy of his 6th birthday, Doorlag told ABC News Thursday.
Doorlag’s family got Zeus when he was 8 weeks old.

“We got him from this couple that had had a litter … and we went and looked at him and fell in love with him,” Doorlag, who works as a veterinary technician, said.
Zeus was a certified therapy dog who visited people in a nearby hospital, Doorlag said.
“He’d sit on people’s laps. I loved to see people’s reactions when he’d sit down,” Doorlag said. “He just seemed to want to make people smile and happy and … he was just a very sweet dog.”
Zeus was named in the Guinness World Records 2013 edition as being the world’s tallest dog.
Doorlag’s wife, Denise, said she loved the reaction she got when they took Zeus outside.
"The most common thing people ask is: 'Is that a dog or a horse?' and 'Where's his saddle?' she said, according to a statement from Guinness at the time the record was announced. The release also said the dog weighed 155 pounds.
Before Zeus set a new record, Guinness said the world’s tallest dog was Giant George, another Great Dane. Giant George, who was one inch shorter than Zeus, died last year at 7.
Zeus had a popular following on Facebook. The page has since been taken down, Doorlag said.
Doorlag said he was gratified by people’s acceptance of his dog.
“I was surprised at how many people just, like, reached out to him and how many people’s, I think, lives he’s touched when we’re doing pet therapy,” he said. “It was just very overwhelming and I loved that about him.”