I am not quite a baseball fan but sometime will follow the games news. 2007 MLB Draft is an important event for the players and fans as well. David Price had made it to the top pick in 2007 draft. He went 11-0 with a 2.71 ERA and led Division I with 175 strikeouts this season. Get the full draft here 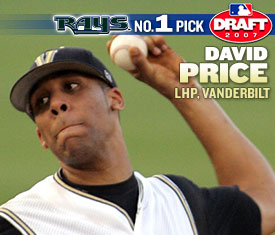 Here is some introduction of what's going on. The First-Year Player Draft is Major League Baseball's primary mechanism for assigning amateur baseball players, from high schools, colleges, and other amateur baseball clubs, to its teams. The draft order is determined based on the previous season's standings, with the team possessing the worst record receiving the first pick. In addition, teams which lost free agents in the previous off-season may be awarded "compensatory" picks.